A lot of people love the tongue tingling feeling that hot peppers give you. We don’t love the throat burning feeling that lasts for the following 15 minutes.  I know from experience you need to be careful in the preparation of spicy chili’s. Prepping jalapenos and then touching your eyes after without thinking about it isn’t fun.

I love spicy food. My dad and I used to make hot wings out of ghost chili’s. They were tasty, but there is a time where the heat is just too much to be practical. Why would you want to eat something that you cant taste, because its burning your mouth so badly? Most often when I see spicy menu items its a challenge to see how hot you can handle.

Food with a kick is fine, but its the flavor that really matters. It doesn’t make sense to cook a really nice dish and destroy it with too much heat. The point of adding heat is to a dish is to add another dimension and bring out more flavor. The point of adding heat is not to kill the taste buds. If the dish has to be taste bud killing hot to be popular its probably not a good dish.

Chili’s should be used in a nice balance with other flavors. The food shouldn’t be too hot, it will ruin the dish. I use chili’s like salt. You can always add more, but you can’t take it out. Add it like a seasoning until you get to the desired taste and level of heat. Peppers often times have a great flavor, but you can’t taste it, because there’s so much of it in the dish. 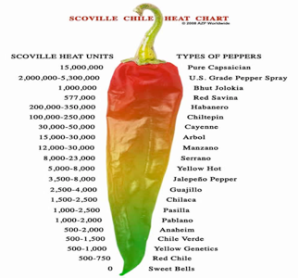